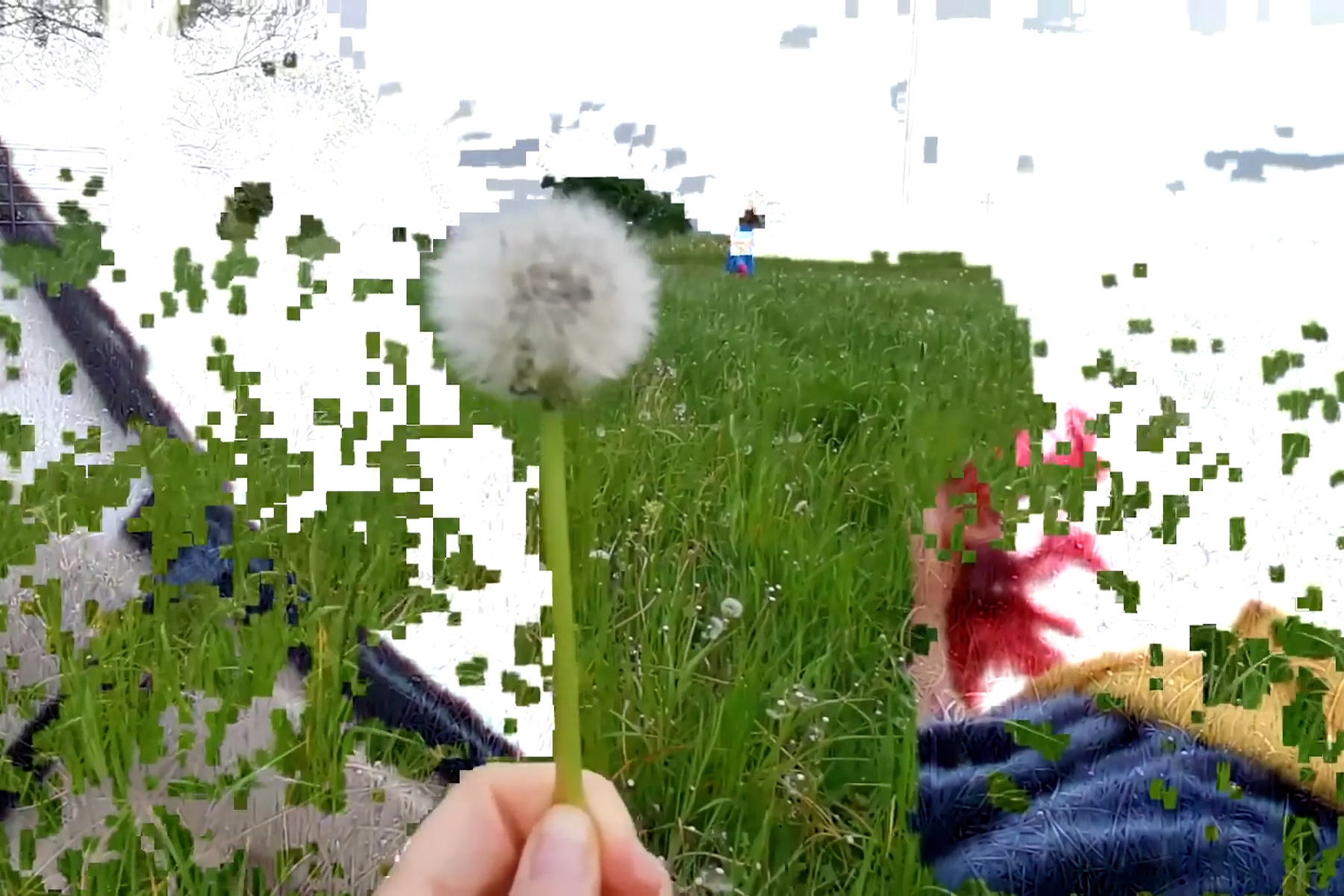 The exhibition explores aesthetic encounters through digital performance by implicating the artist, technology, and the viewer. On display will be performative videos, a large scale projection, digital landscape “paintings” and an exploratory series of generative digital animations. Putnam examines performance art beyond lens based media, while questioning the ways time and space collapsed during the pandemic.

The exhibition is anchored by a large-scale projection All Kinds of Disintegration (2020). Shot in the summer of 2020 using a smartphone, the piece presents a layered collection of short vignettes captured during the first period of COVID-19 lockdown. The maternal is re-imagined in unfamiliar ways though a co-created transformative landscape using performed actions, moving image, and sound. A new video series Foundations (2022-23), is presented on three individual, yet connected monitors to form a color saturated triptych. Putnam uses datamoshing, a form of intentional image glitching, to create the dramatic dreamy visual effects. She thinks of the series as a type of digital watercolor painting.

Two performative video works Context Collapse (2020) and Interlooping (2021) explore new virtual performance modalities as all in-person performance opportunities were canceled during the pandemic. Both performances were instead livestreamed for online audiences. Context Collapse was created in response to the many pandemic public health restrictions which caused the closure of schools, workplaces, and other public spaces as people were encouraged to “stay home.” This compression of one’s personal, professional, and family spheres introduced a new type of context collapse. By contrast, Interlooping addresses the relationship of the performing human with technology, the non-human, and our collective being. EL Incorporates wool refuse accumulated during the disruption of the international wool trade in Ireland as a result of COVID-19.

Emergent (2020-2022) is a new series of generative animations developed through Putnam’s daily digital sketching practice of creating generative animations through p5.js. Emergent is a portrait of the artist’s experience of the COVID-19 pandemic as it visualizes the data tracked through a fitbit. Instead of focusing on the intended use of the fitness tracker as an accurate record keeper of physical activity, Putnam draws attention to the gaps in data collection, the goals not met, and the capacity of physical activity to exceed sensory quantification.

Additionally, Putnam will create and perform two new, live performance works Ghost Work  and Friction as part of the exhibition programming. Putnam uses wearable electronics as part of her performances to explore our gestural relationship to digital technologies. Mary Gray and Siddharth Suri define “ghost work” as the hidden human labor that powers our digital systems. In the performance of this title, Putnam acts as the human mediator between two generative animation systems, making visible the labor that responds to and produces data, as her body acts as the database of lived experience. A collaborative performance, Friction, created and performed with German sound artist David Stalling will debut in March.