Julia Csekö: A Coney Island of the Mind – text by John Lewis 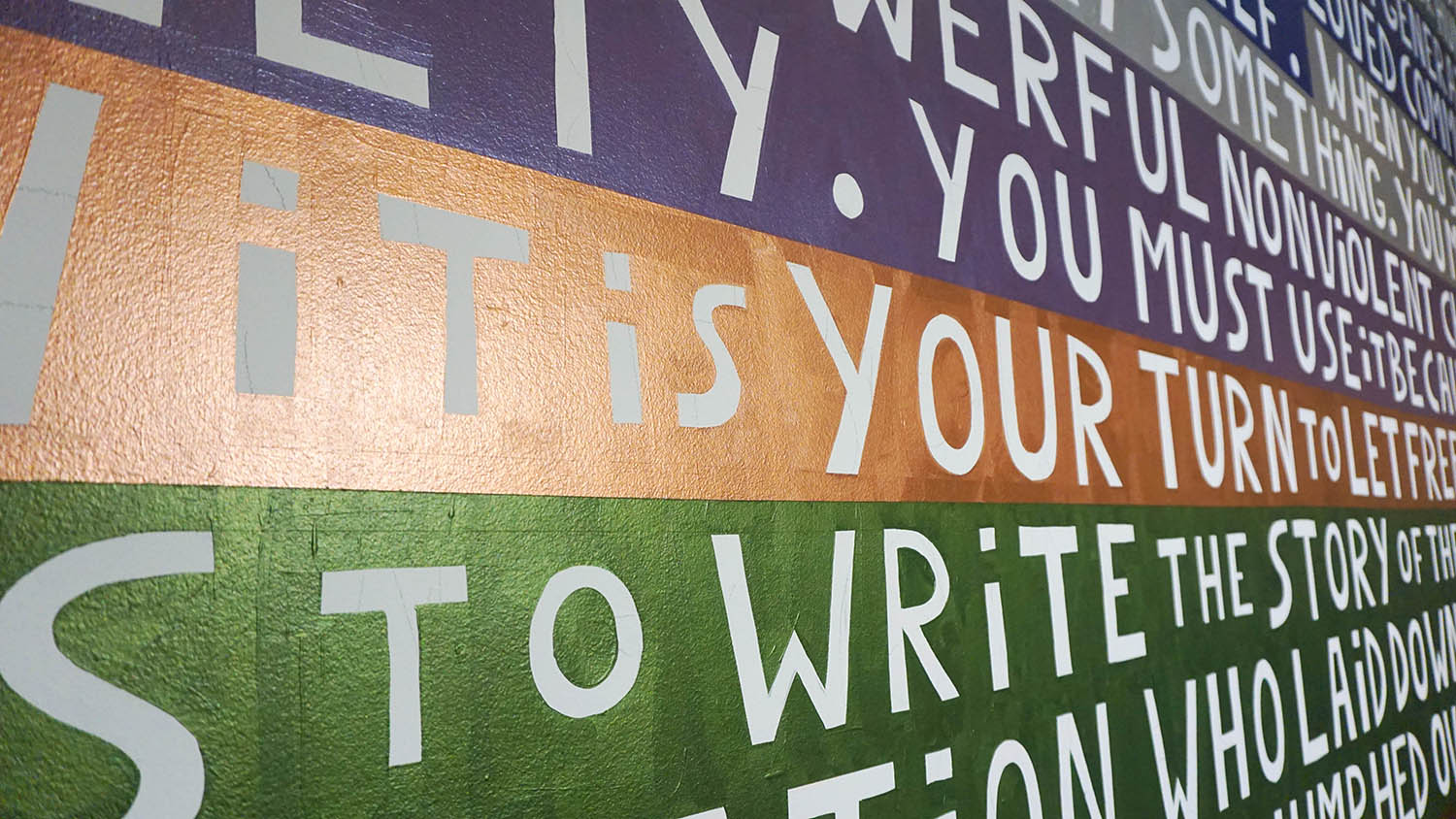 A Coney Island of the Mind was commissioned by Emerson College as a response to anti-Semitic and white supremacist graffiti found on the Piano Row Campus. The Emerson administration began a conversation with the student body to understand how they wanted to approach the incident. The students requested that a piece of art be created in response. Leonie Bradbury, the Henry and Lois Foster Chair of Contemporary Art Theory and Practice, Distinguished Curator-in-Residence at Emerson College stepped in to create a student advisory board. The text selection was of great importance – and everyone involved expressed the desire for an uplifting message, something that would propose and inspire, propel us to navigate the anxiety caused by the unstable political scenario and social distancing practices with strength and clarity.

The conversation extended for weeks, and on the very day of our final meeting, Bradbury suggested using the essay published in the New York Times on July 30th, 2020, written by John Lewis himself, inspired by the Black Lives Matter protests of 2020. The essay was read at Lewis’s funeral. He passed days after writing it, leaving an elegant and beautiful message of resilience and resistance and his last words touched us all very deeply. He addressed and praised the union of people from all backgrounds towards the fight for human dignity, justice, democracy, and equality, and urged us to end bigotry within our lifetime.

The essay had many beautiful passages, and it was an incredible honor and pleasure to pick a few of his words to live within the Emerson Campus. Much in the spirit of John Lewis’ lifelong advocacy for nonviolent protest, a hateful act resulted in a hopeful outcome. This mural was made to honor Lewis’s memory and entice the viewer to learn more about his exemplary life as an activist and statesman. It is but a small contribution to keep Lewis’s deeds and words present in our hearts and minds. Lewis participated in many of the Freedom Rides, being brutalized, assaulted, and humiliated, but even the mental and physical suffering caused to him did not distract him from his vision of the future, or from his mission of radical pacifism as a transformative agent. No one should ever endure what Lewis did, and what many BIPOC peoples continue to endure, and have endured historically. Returning to the original incident that resulted in the creation of this mural, we must not forget the horrors of the holocaust. As we must not forget the horrors of slavery, segregation, and racial inequality. Both of these sore topics share the looming threat of white supremacy as a common denominator, and Lewis’s message of unity against bigotry shines bright, illuminating the path out of hatred into a society based on justice, peace, and equality.

Lewis urges us to continue to exercise our rights and duties as citizens. To participate, to unite, and to vote, because in his own words, “democracy is not a state, it is an act”, and the right to vote is not a guarantee, it needs to be upheld as the clearest sign of a functioning democracy. In honor and remembrance of all those who were lost to the horrors of the holocaust, and to the horrors of slavery. In honor and acknowledgment of all of those who still suffer prejudice, bigotry, and violence, be it for their religious faith, their culture, the color of their skin, or their sexuality. Let John Lewis continuously encourage us to unite and build a better future: “When Historians pick up their pens to write the story of the 21st century, let them say that it was your generation who laid down the heavy burdens of hate at last and that peace finally triumphed over violence, aggression, and war.” […] “Walk with the wind brothers and sisters, and let the spirit of peace and the power of everlasting love be your guide.” 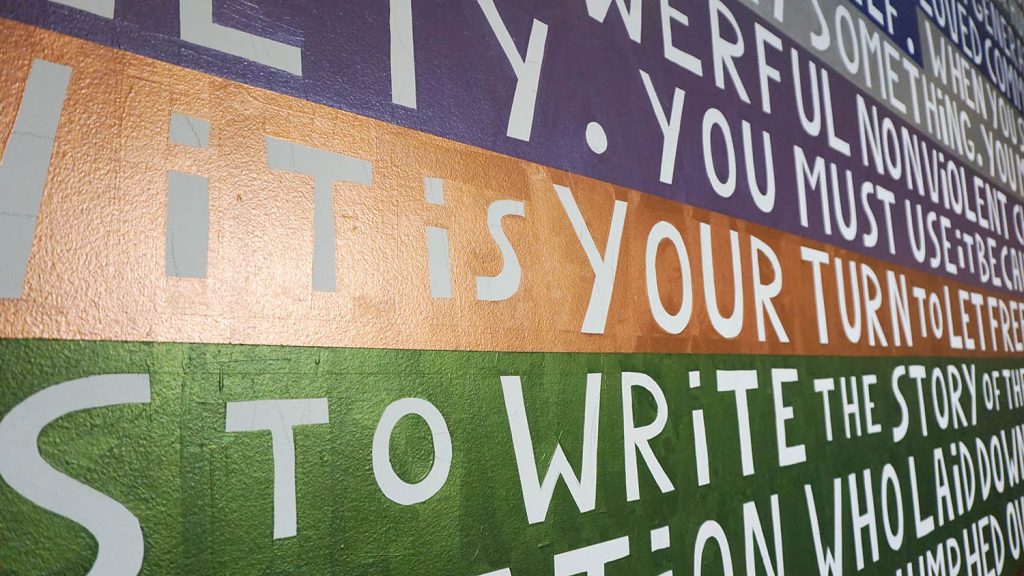 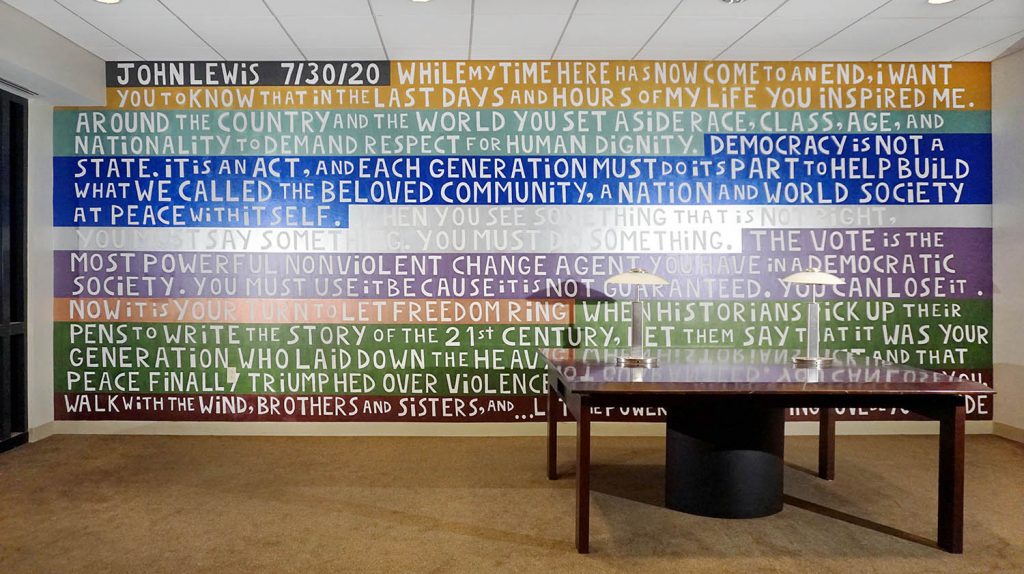