Emilio Rojas: tracing a wound through my body 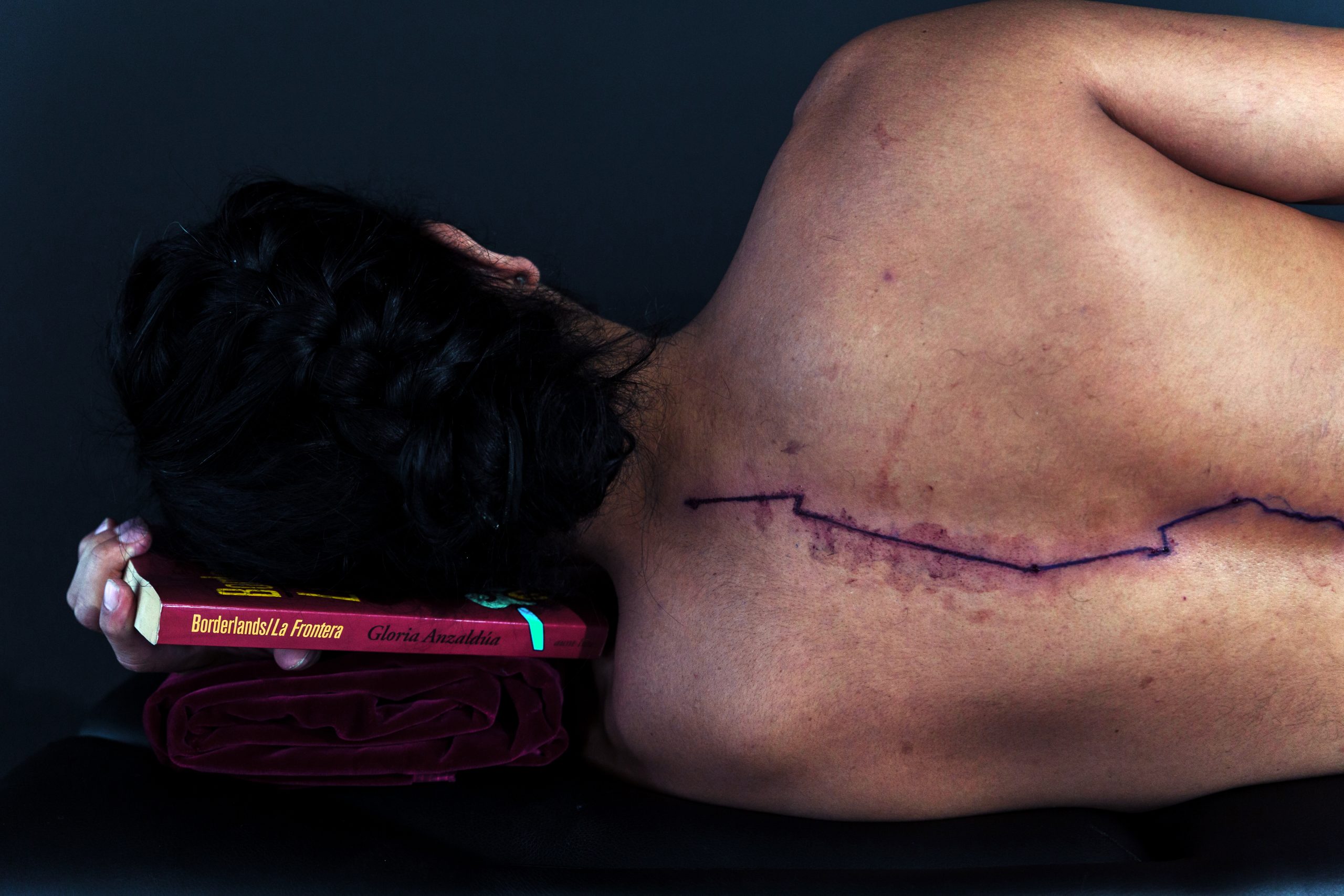 The U.S-Mexican border es una herida abierta where the Third World grates against the first and bleeds.

tracing a wound through my body is the first traveling survey of the contemporary and multidisciplinary practice of artist Emilio Rojas (b. 1985 Mexico City), on view September 21–November 6, 2022 at Emerson Contemporary. The exhibition brings together works spanning the past decade including live performances and interventions, documents of performance sustained in video and ephemera, photography, sculpture, installation, and poetry. Recognizing the act of tracing dualistically, tracing a wound through my body both reexamines the artist’s corpus and reckons with the legacies of colonial and border traumas. For Rojas, such reckoning renders palpable visible and invisible wounds through the radically political instrumentalization of his body.

The included works relate to Rojas’ migratory experience and his rigorous research-based practice. Drawing upon queer and decolonized methodologies, his performative works interrogate extant structures of colonialism and border politics. The exhibition takes place in a moment in which nativist rhetoric and xenophobic immigration legislation in the United States and beyond deepens wounds already open. Rojas’ works not only confront the historical precedents for such trauma, but also speculate upon Chicana cultural theorist Gloria E. Anzaldúa’s proposition of the wound transforming into a pathway for healing.

tracing a wound through my body will be on display at the Media Art Gallery with works installed throughout Emerson College’s campus, including the Huret and Spector galleries, Tufte Stairwell, 2 Boylston Place, Little Building Lobby, and The Iwasaki Library.

The exhibition is accompanied by a public programming series and an exhibition catalog featuring new scholarship from Ethan Madarieta, Laurel V. McLaughlin, Mechtild Widrich with Andrei Pop, and Rebecca Schneider; an interview with Ernesto Pujol; a creative writing contribution from Valeria Luiselli; and new poetry from Pamela Sneed and Emilio Rojas. Emilio Rojas: tracing a wound through my body is curated by Laurel V. McLaughlin and organized by Lafayette College Art Galleries, Easton, PA with travel administered by Artspace New Haven.

Emilio Rojas is a multidisciplinary artist working primarily with the body in performance, using video, photography, installation, public interventions, and sculpture. He holds an MFA in Performance from The School of the Art Institute of Chicago and a BFA in Film from Emily Carr University in Vancouver, Canada.

As a queer Latinx immigrant with indigenous heritage, it is essential to his practice to engage in the postcolonial ethical imperative to uncover, investigate, and make visible and audible undervalued or disparaged sites of knowledge, narratives, and individuals. He utilizes his body in a political and critical way, as an instrument to unearth removed traumas, embodied forms of decolonization, migration, and poetics of space.

His research-based practice is heavily influenced by queer and feminist archives, border politics, botanical colonialism, and defaced monuments. Besides his artistic practice, he is also a translator, community activist, yoga teacher, and anti-oppression facilitator with queer, migrant, and refugee youth.

Friday, October 14, 4-8 PM. One-on-one performance, A Manual to Be (to Kill) or To Forgive My Own Father, 2015–ongoing. Location: The Iwasaki Library, 3rd floor, Walker Building, 120 Boylston Street, Boston, MA

Saturday, October 15, 12-4 PM. One-on-one performance, A Manual to Be (to Kill) or To Forgive My Own Father, 2015–ongoing. Location: The Iwasaki Library, 3rd floor, Walker Building, 120 Boylston Street, Boston, MA

Sunday, October 16, 12-4 PM. One-on-one performance, A Manual to Be (to Kill) or To Forgive My Own Father, 2015–ongoing. Location: The Iwasaki Library, 3rd floor, Walker Building, 120 Boylston Street, Boston, MA